Every morning, millions of Americans start their day by driving or walking to work, to school or to run errands. As drivers and passengers in a car, you and your family are well-protected whenever you take to the road. This is, in large part, thanks to advances in technology, such as seat belts, airbags, blind spot detectors and rearview cameras. But, as pedestrians, you and your family are in increasingly more danger whenever you’re on foot, especially if you’re near roadways or parking lots.

In fact, The Governors Highway Safety Association estimates that the number of pedestrians killed in car crashes rose by 10 percent between 2014 and 2015. To help protect your family, it’s important to understand the causes for pedestrian fatalities, like how to prevent distracted driving as well as the safest steps to take as a pedestrian.

Why Are Pedestrian Deaths on the Rise?

According to Allan Williams, chief scientist at the Insurance Institute for Highway Safety (IIHS), when the National Maximum Speed Law was passed in 1974, limiting the speed limit to 55 mph on all interstate roads, fatality rates dropped significantly. However, after the law was repealed in the 90s, roadway fatalities increased.

And although speed limits have increased over time, some drivers still deem it necessary to exceed that limit. According to AAA’s 2015 Traffic Safety Culture Index, nearly half of all respondents (45%) said they had driven 10 miles over the speed limit on a residential street.

Given these findings, it isn’t difficult to understand why pedestrian casualties have risen. When people drive fast, even when they’re driving within the speed limit, streets and crosswalks can become more dangerous for pedestrians, (but this is especially true when people do not abide by the law).

Distracted driving from a device was also a major contributor to increased crash frequency, according to AAA’s 2015 Traffic Safety Culture Index. Although distraction has always been an issue for concern, in recent years, the ways in which drivers can be distracted have greatly evolved.

Texting while driving, in particular, has become a fairly widespread and incredibly dangerous behavior. In fact, although 77 percent of drivers who participated in AAA’s report say texting or emailing is a very serious threat to safety, and 80 percent say it is completely unacceptable, almost half (42%) reported having read a text or an email while driving, and nearly one-third (31%) reported having typed one. Drivers are 23 times more likely to get into an crash while texting, according to the National Highway Transportation Safety Administration.

And it is unlikely that there will be a drastic decline in this behavior. According to Pew Research Center, smartphone ownership has almost doubled in recent years, from 35 percent in May 2011 to 68 percent in July 2015. As the number of smartphone users increases, so does the likelihood that someone will send a text message or an email while driving.

Drowsy driving is also a major threat to roadway safety. Although many drivers recognize the dangers of drowsy driving, (48% said it is a very serious threat; 83% said it is completely unacceptable), some (31%) have still driven while drowsy.

According to Dr. Nathaniel Watson, president-elect of the American Academy of Sleep Medicine, driving while sleep-deprived is similar to driving while intoxicated. Both compromise “driving ability by reducing alertness and attentiveness, delaying reaction times, and hindering decision-making skills.” And both place pedestrians and drivers in danger. While sleep deprivation decreases a driver’s awareness, it can also cause the driver to present road rage.

Following simple safety precautions, like putting away your phone, can help prevent fatalities. Here are tips to avoid car crashes when you’re behind the wheel: 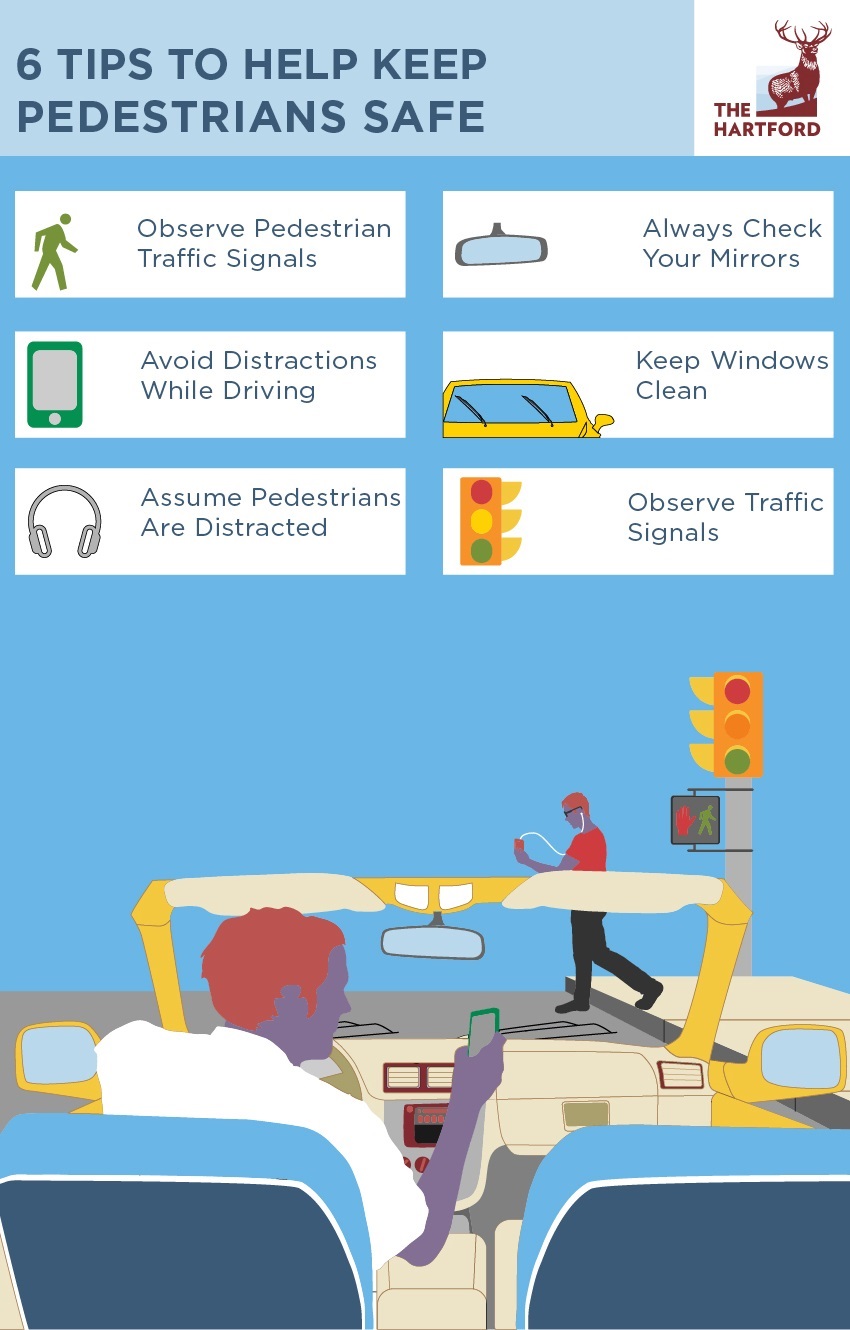 It’s not just drivers who are distracted. Even pedestrians may fail to pay attention when outdoors, wandering into dangerous areas such as busy streets or active parking lots. In fact, distracted walking is becoming more common than ever. A nationwide study by Ohio State University found that the number of pedestrians treated for injuries related to phone use while walking doubled between 2005 and 2013.

There are also other pedestrian-related factors that have contributed to the rise in casualties. One of the most significant is an overall rise in the number of people walking. Many people are making the effort to walk more, for both environmental and health reasons. (As evidence of this, pedometers, such as the Fitbit, have soared in popularity in recent years.) With more people walking outdoors, there is an increased likelihood for pedestrian accidents.

Even though individuals are expected to behave safely of their own accord, the planning of roadways, sidewalks and traffic lights has long been an important factor in keeping both drivers and pedestrians safe and preventing traffic or congestion. In recent years, there have been major developments to help advance this effort, such as dedicated lanes for buses and cyclists and audible traffic cues for people with poor eyesight.

And some countries are employing sophisticated and innovative solutions to help protect pedestrians. Germany, for example, has installed inground traffic lights so that pedestrians who are looking down at their phones will still be able to see the traffic signals.

As advances in technology lead to breakthrough safety solutions, they also introduce new distractions for both drivers and pedestrians. Fortunately, there are still steps we can take to help keep our loved ones safe. We can teach our children and grandchildren to look before crossing and to put down their phones when walking and driving. This in part can help decrease any insurance premiums after an incident. Most importantly though, we can be role models for safe behavior to others. By accepting this responsibility, we can help prevent ourselves and our loved ones from becoming another crash statistic.

3 Responses to "Pedestrian Safety Tips: On Foot & Behind the Wheel"
Leave a Reply Cancel reply